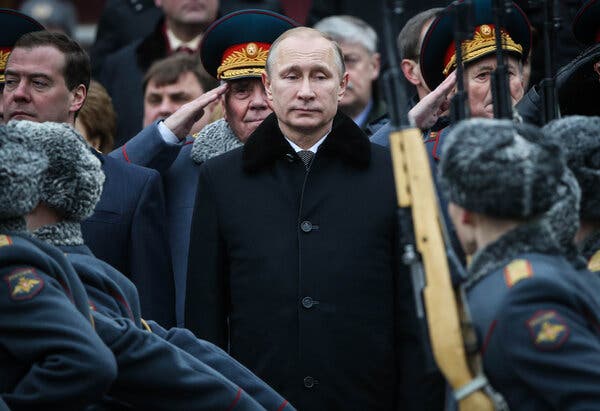 America’s Right Has a Putin Problem

March 10, 2022
Just a few weeks ago many influential figures on the U.S. right loved, just loved Vladimir Putin. In fact, some of them still can’t quit him. For example, Tucker Carlson, while he has grudgingly backed off from full-on Putin support, is still blaming America for the war and promoting Russian disinformation about U.S.-funded bioweapons labs.

For the most part, however, America’s Putin lovers are having a moment of truth. It’s not so much that Putin stands revealed as a tyrant willing to kill large numbers of innocent people — they knew or should have known that already. The problem is that the strongman they admired — whom Donald Trump praised as “savvy” and a “genius” just before he invaded Ukraine — is turning out to be remarkably weak. And that’s not an accident. Russia is facing disaster precisely because it is ruled by a man who accepts no criticism and brooks no dissent.

On the military side, a war Russia clearly envisioned as a blitzkrieg that would overrun Ukraine in days has yet to capture any of the country’s top 10 cities — although long-range bombardment is turning those cities into rubble. On the economic side, Putin’s attempt to insulate himself from potential Western sanctions has been a debacle, with everything indicating that Russia will have a depression-level slump. To see why this matters, you need to understand the sources of the right’s infatuation with a brutal dictator, an infatuation that began even before Trump’s rise.

Some of this dictator-love reflected the belief that Putin was a champion of antiwokeness — someone who wouldn’t accuse you of being a racist, who denounced cancel culture and “gay propaganda.”

Finally, many on the right simply like the idea of authoritarian rule. Just a few days ago Trump, who has dialed back his praise for Putin, chose instead to express admiration for North Korea’s Kim Jong-un. Kim’s generals and aides, he noted, “cowered” when the dictator spoke, adding that “I want my people to act like that.”

But we’re now relearning an old lesson: Sometimes, what looks like strength is actually a source of weakness.

Whatever eventually happens in the war, it’s clear that Russia’s military was far less formidable than it appeared on paper. Russian forces appear to be undertrained and badly led; there also seem to be problems with Russian equipment, such as communications devices.

These weaknesses might have been apparent to Putin before the war if investigative journalists or independent watchdogs within his government had been in a position to assess the country’s true military readiness. But such things aren’t possible in Putin’s Russia.

The invaders were also clearly shocked by Ukraine’s resistance — both by its resolve and by its competence. Realistic intelligence assessments might have warned Russia that this might happen; but would you want to have been the official standing up and saying, “Mr. President, I’m afraid we may be underestimating the Ukrainians”?

On the economic side, I have to admit that both the West’s willingness to impose sanctions and the effectiveness of those sanctions have surprised just about everyone, myself included.

But again, would you have wanted to be the diplomat telling Putin that the West isn’t as decadent as he thinks, the banker telling him that his vaunted “war chest” will be useless in a crisis, the economist telling him that Russia needs imports?

The point is that the case for an open society — a society that allows dissent and criticism — goes beyond truth and morality. Open societies are also, by and large, more effective than closed-off autocracies. That is, while you might imagine that there are big advantages to rule by a strongman who can simply tell people what to do, these advantages are more than offset by the absence of free discussion and independent thought. Nobody can tell the strongman that he’s wrong or urge him to think twice before making a disastrous decision.

Which brings me back to America’s erstwhile Putin admirers. I’d like to think that they’ll take Russia’s Ukraine debacle as an object lesson and rethink their own hostility to democracy. OK, I don’t really expect that to happen. But we can always hope.
Publicado por Falcón en 1:04